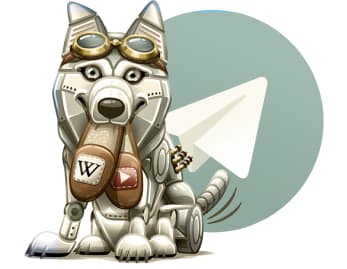 A Telegram bot is a robot inside Telegram, operating by an algorithm. We’re the ones who set the algorithm. It can be simple, such as: take a phone number and a name, form and send an application for purchase of any goods.

In other cases, it can be complex: for example, this can be an interface of a cryptocurrency platform, where you can view real time quotations, pass KYC inside the messenger, buy or sell the tokens.

A bot helps the business make more money or spend less resources. Its functionality is entirely dependent on your requirements. Our task is to set the optimum algorithm for the bot, so that it is useful, able to perform commercial tasks and not overburdened with functionality.

Such a bot duplicates the functionality of a website or a mobile application.
Almost any web or mobile mechanism can be transferred to the interface of the messenger. If you website sends notifications to the customers upon change of their order status, the same can be done by the bot inside Telegram.

A bot can either be publicly available, when anyone can communicate with the robot, or private, only for certain users. This means that not only customer services, but also in-house corporate systems can be duplicated in a bot.

A bot which is used in Telegram groups to perform system functions.

For example, there is a group of a district sports ground, where the guys can chat and agree on the next game. The bot will take care of the rest: it gets the game on the schedule, enrolls members of the team, runs elections of the captains, and shows on request how many places are left in the team.

Another example is an in-house office chat. The employees choose meals for lunch, while the bot calculates total serves, assumes identical serves and places the order. After the lunch, everyone decides to discuss an important issue in the chat, Upon a single command, the bot will compile the messages in a task, post the task in the task manager and assign the performer, so that nothing important is lost in the maze of endless messaging.

What is the most important thing in a shop? It’s the catalog and the possibility of placing an order. Now, this can be done not only via a regular online shop, but also via a bot.

The development cost of a game bot may be recouped by advertisements and in-game purchases. The bot is able to accept payments from credit cards, e-wallets and cryptocurrency wallets.

The types of games are:
1. Browser games.
They open in the embedded Telegram browser. The game itself may be of any format: quest, action, RPG, strategy, simulator, or gambling games. A game may be either single-player or multi-player.
2. Single-player text games.
A single-player game is when a player only communicates with a bot. There may be more players in the game, but all of them only receive messages from the bot. The game is more like a regular chat bot: unlike in conventional games, there are no character control buttons. Game actions are done with command buttons. A good example is lottery, where a user presses the Play button and receives the bot’s reply with the results of the drawing.
3. Multi-player text games.
Users communicate with each other and give game commands to the bot. This can be, for example, a quiz. A bot sends a question to the chat. The one who was the fastest and correct, gets a bonus.
Бот №9
Бот №9

The bot can be connected to the control panel, like a CMS for a website.
The panel can be web-based or implemented directly in Telegram. You can easily make modifications to it on your own.
Without the panel, the bot will operate like a website without a CMS.
To make modifications, you need to call in a programmer.
Bot helps businesses become agile and increase sales
order bot development
How a bot is useful for your business?

A bot can aid in small business, when it is shorthanded,
or become part of global processes in big business.

Here are some examples:

A bot can take orders and accept payments, either with a credit card, e-money or even in cryptocurrency.

If the catalog is large, a bot can serve as a link to the dashboard, or can be used to retrieve information on current orders, discounts and offers.
Other features that can be added to a bot are FAQ and call for manager.

Conveying questions to the speakers, online voting, notification of different activities. This is just a tiny part of what an event bot can do.

If there are many speakers at your forum, people can find out who is speaking at the moment. It’s one thing to look for a paper program and check through it, but it’s quite another thing to send a request to a bot. In the light of movement for conscious consumption, this can be presented as care for preservation of natural resources.

Moreover, there is embedded advertising. The event sponsors will appreciate that you took care of them when developing the bot. 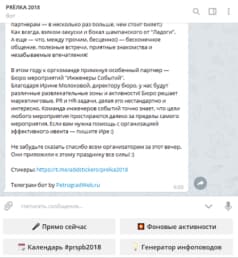 Special projects and contests for FMCG

Mechanisms of quizzes, contests and quests can be implemented via a bot. What used to be done via landings, now fits into functionality of a bot.

In such a case, engagement is greatly improved.

It seems that bots will soon become indispensable aid in this area.

A bot can relieve the managers or even operate as a separate mechanism.

The bot development cost depends on the number of features and integration
with external services and databases.

The same bot for the same online shop can be integrated in different ways.

The orders can be sent in the chat to an employee, to the e-mail, or directly to the CRM.
Such integrations require different labor costs.

Cost of developing a bot:
starting from $700
You have no idea what a bot must do to tackle your tasks?

Leave an application, and we’ll suggest you some options.
You will choose the one you consider suitable.